Hi all! It's Alex here! Since both the field and lab school sessions have ended, I have been working on inventorying the artifacts excavated at Sherburne House. The Sherburne House is the oldest house at Strawbery Banke, built around 1695. The excavations at Sherburne in the 1970s were among the earliest professional explorations at the museum, many of which were intended to support the interpretation and restoration of the historic houses. The research driving the Sherburne excavations focused on the design and components of the historic garden in the Sherburne back yard, but revealed elements about 17th and early 18th century land use, property division, and additions to the Sherburne lot as well. Because the quadricentennial anniversary of the first English settlement here in Portsmouth is coming up in five years, the Sherburne House is especially significant in tying Strawbery Banke back to the early history of the neighborhood.


The ultimate goal of my inventory project is to make the Sherburne artifact collection more accessible for future research. These artifacts could be used for potential exhibits at Strawbery Banke, comparative analysis research with other recently excavated sites both on museum grounds or beyond, such as the Chadbourne site in Maine. This inventory project also represents a really good opportunity for digitizing many early museum archives and records!


Since I am headed back to school for a year abroad, I hope that the next archaeology intern will be able to continue this work on Sherburne.

Researching over 200 buttons from the Yeaton-Walsh site!

Hello everyone - my name is Emma Pearce and I recently graduated from the University of New Hampshire with my BA in Anthropology. I participated in both the field school as well as the lab school this summer at Strawbery Banke and had one of the best summers of my life getting to learn all about the history of Portsmouth; not only from Strawbery Banke but other historical houses in the area as well.

For my research topic, I chose to delve into the world of buttons! Buttons are a really interesting personal adornment to research because they can tell you a lot about someone. They give us a better idea of what people may have been wearing and what their fashion sense was like compared to ours and they truly help us better understand the material culture of the time they were from. During my research, I looked at over 200 buttons from the 2015 Yeaton-Walsh dig at Strawbery Banke. I separated each button into individual bags with labels and thought it would be a good idea to put them into an Excel spreadsheet to give me a better idea of how many different types and styles of buttons I actually had in front of me.

The Yeaton-Walsh button collection is interesting for a few reasons:
1. There are so many different styles of buttons - from modern plastic to confederacy buttons from the Civil War.
2. There are original bone buttons that were made before button companies started to mass produce that specific kind of button.
3. There were a lot of military buttons found at this site which is interesting because records haven't been found of someone living in the house being in the military . Maybe they were collectors and loved buttons as much as I do! 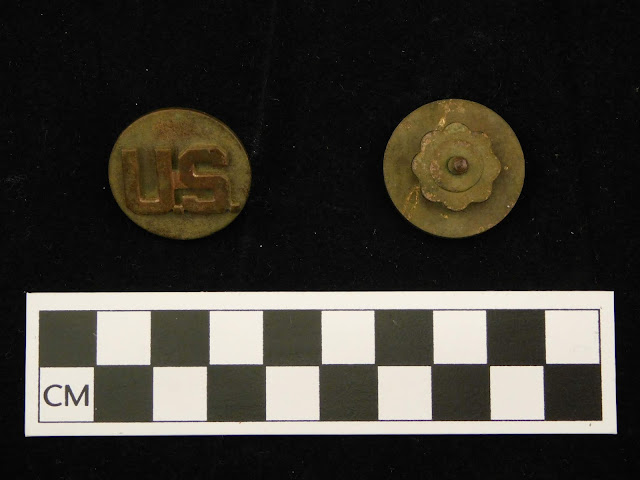 This is a military collar button from WWII. What is interesting about this button is that the back has a cookie-cutter design. This design is very rare. So few buttons with this backing have been found that make it hard to give a specific date as to when during WWII these were made- which makes it really awesome that we have one in our collection! 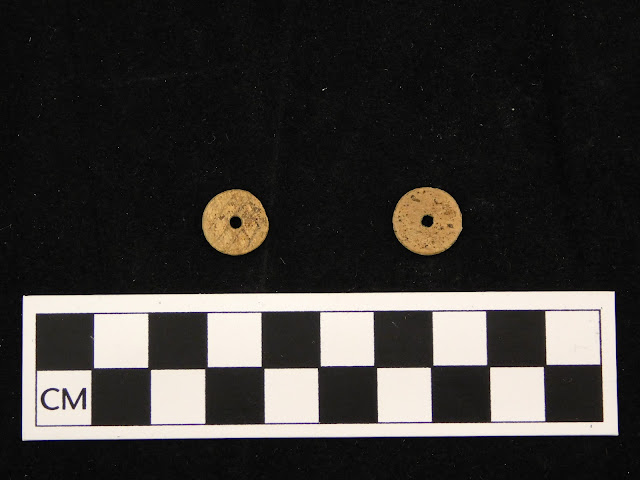 These are one-hole bone buttons, made from animal bone. Bone buttons were thought to have first been made around the 12th century in France and have come a long way since then. Bone buttons are very fragile and may be easily broken when excavating in the field. These two buttons are similar at first glance but if you look close enough you can see the that the one on the left has a little bit of detail etched into the bone! 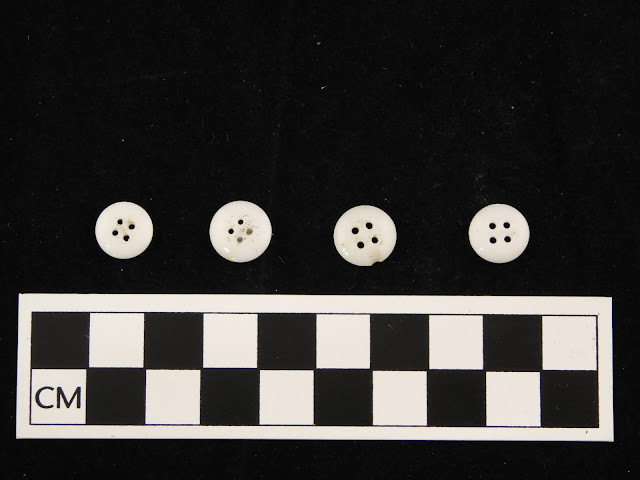 These four buttons may look like any ordinary glass button but they are not! These are called "prosser-style" buttons. They are known to be one of the most misidentified artifacts found in 19th and 20th century sites because they are actually made of ceramic and not glass. They were manufactured by the Prosser process and can be dated to any time after 1840. They are very interesting because they look like normal glass buttons, but, one side is rougher to the touch. The Yeaton-Walsh site was full of prosser-style buttons but knowing they were made after 1840 helped us with dating and clothing styles a little bit more!

Although I have researched over 200 buttons, it would take me far too long to post a picture of every single one on here; although I wish I could! Being able to research a collection as abundant and interesting as the one here at Strawbery Banke has been one of the most rewarding experiences I have ever had. My button research is far from over and I can't wait to hopefully, one day, be able to look at other button collections as well!
Posted by Unknown at 1:03 PM No comments: