Sankofa: Look to the Past

On Chestnut Street here in Portsmouth, construction has been progressing on the African Burying Ground Memorial Park, which is scheduled to finish later this fall, with a formal dedication ceremony in the spring of 2015.

In 2003, excavation for the city's Court Street Reconstruction Project encountered a burial, and archaeologists from Independent Archaeological Consulting worked to recover the remains of eight individuals.  It is the only known colonial African American cemetery to have been archaeologically investigated in New England.  DNA analysis confirmed that the individuals were of African descent.  Historical research indicated that this burial ground was used in the early 18th century, when this area of Portsmouth was on the outskirts of town.  When the city expanded throughout the 19th century, the street was paved over and its exact location was forgotten.   As many as 200 enslaved Africans and African Americans are still buried, undisturbed by 21st century construction.


The memorial will include space for sculpture, reflection, and public education.  The remains of the eight individuals exhumed will be re-interred in a vault in the meditation area of the park.  The vault will be marked with a sankofa, an Andinkra symbol from the West African Akan Asante language.  Sankofa translates as "reach back and get it," and is often associated with a proverb that means "look to the past to inform the future."

Until the park opens, there is a series of signs, installed along Chestnut Street in 2012, that inform pedestrians of the African Burying Ground and the African community of colonial Portsmouth.  The signs include the sankofa symbol as well.  The signs were designed by Elisa Winter Holben, a graphic artist in Kittery.


Like Portsmouth's African Burying Ground, the Manhattan African Burial Ground was a cemetery for free and enslaved Africans, who were buried there from the late 17th century through 1794. The 6.6 acre burial ground was forgotten due to city development, but the planned construction of a Federal building resulted in the accidental discovery of burials in 1991.  Over 400 men, women, and children of African descent were recovered from the site by archaeologists in the 1990s.  Responding to concerns from the local community, the project was taken on by Dr. Michael Blakey, then at Howard University, for study of the remains.  Dr. Blakey worked hard to make sure that African-American students and community members had a participatory role in the research direction and study of their ethnic ancestors' remains. One of the burials was interred in a coffin decorated with tacks that had been nailed in to the wooden lid.  The decoration seemed uniquely familiar to Dr. Blakey.  The symbol was recognized as sankofa in 1995 by Kwaku Ofori-Ansa, an expert in African art at Howard University.
In a 2003 interview, Dr. Blakey remarked that that sankofa "resonates so completely with the African Burial Ground. It has to do with the idea that you need to go back and search in the past, to let the past be a guide. It has to do with the connection with past and present... I think the African Burial Ground has helped disseminate knowledge of that symbol and its message."  In 2003 the remains were re-interred and a partnership with the National Park Service resulted in a Memorial, which was dedicated in 2007.  Today, Dr. Blakey continues research of the African Burial Ground, and has developed a comparative database on the bioarchaeology of the African Diaspora at the Institute for Historical Biology at the College of William & Mary.
The sankofa symbol is meaningful to many, and is relevant at the New York African Burial Ground, and at Portsmouth's African Burying Ground as well.  For African Americans and scholars of the African diaspora today, the fact that sankofa may be found in West Africa, the Caribbean, and in America is evidence that despite the dispossession of the Atlantic slave trade, Africans maintained elements of their own culture.

References
In Honor of Those Forgotten: The Portsmouth, New Hampshire African Burying Ground

The Strawbery Banke archaeology department has a great group of volunteers, many of whom were on site daily during this summer's excavation of the mikveh at the Pecunies House.  They volunteer year round in the lab, where they help clean, catalog, and analyze the artifacts we recovered.  One of our volunteers also happens to be a talented artist. Some readers may know him from his New Hampshire Archaeology Month event in 2013, in which he taught participants to draw artifacts.  After our excavation ended this summer, Kent worked on illustrating the mikveh as it might have looked 100 years ago. 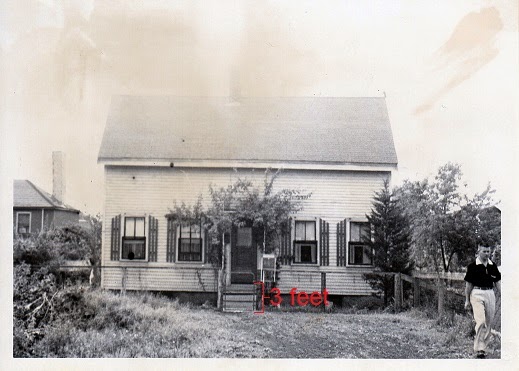 Our excavation revealed the dimensions of the floor of the mikveh (4' x 5'6"), and after consulting with Ronnie Pecunies, the mid-20th century inhabitant of the house, he confirmed that one would enter the mikveh through a door on the ground floor.  Using the Historical American Building Survey photo of the front of the house along with the HABS measurements of the foundation footprint, we calculated that the ground floor was 3' above the current ground surface.  The mikveh floor was at 2' below ground surface, which means the whole mikveh was about 5' deep. 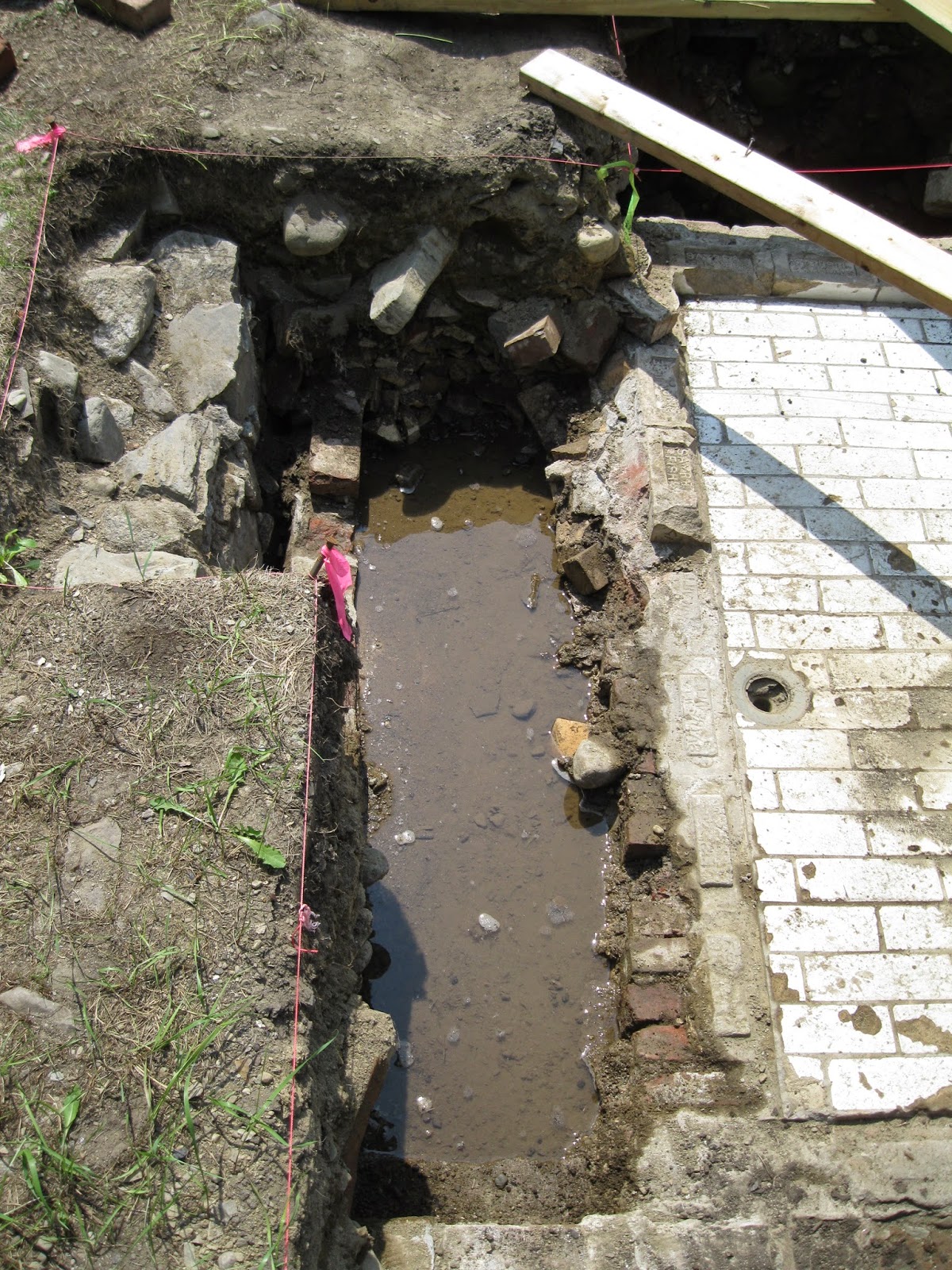 To the south of the mikveh floor, there is a cistern-like structure that we interpreted as the mikveh's bor, or the reservoir where rainwater was collected for filling the mikveh.  Since the last photo we posted of the bor back in July, we had expanded our excavation block slightly to the east, on Ronnie's urging, "that's where the stairs were!"  We didn't find the stairs - presumably they were torn down along with the walls of the mikveh when the house was demolished in the 1960s - but we did find that the bor was built all along the entire southern wall of the mikveh.  Evidently the stairs were built over the bor, and they, like the bor itself, would have been 1'6" wide, making the length and the width of the finished mikveh a square 5'6" at the top.
Kent's drawing gives us an interpretation of the mikveh as a finished bath, that one would have entered through a doorway. He included a window that we spotted in a historic photo of the back of the house.  He added the seven steps typical of mikvehs.  A hole in the wall below these stairs would have allowed rainwater from the bor to flow into the mikveh.  It turns out that this mikveh would have held over 900 gallons of water!  It is exciting to see how the combination of research and imagination come together in a useful product like this drawing.  Thanks Kent! 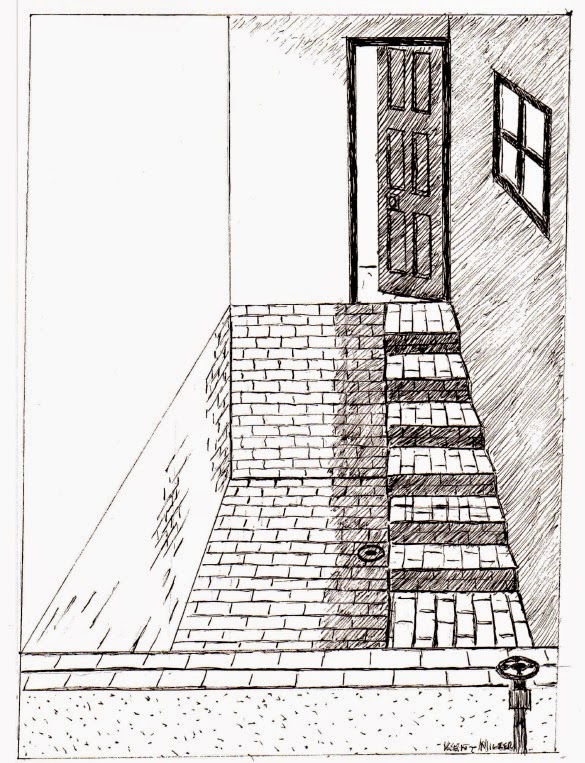 Has anyone ever seen a mikveh that looked like this one?  Have you ever used artwork to visualize archaeological interpretations?

Archaeology at the Conant House 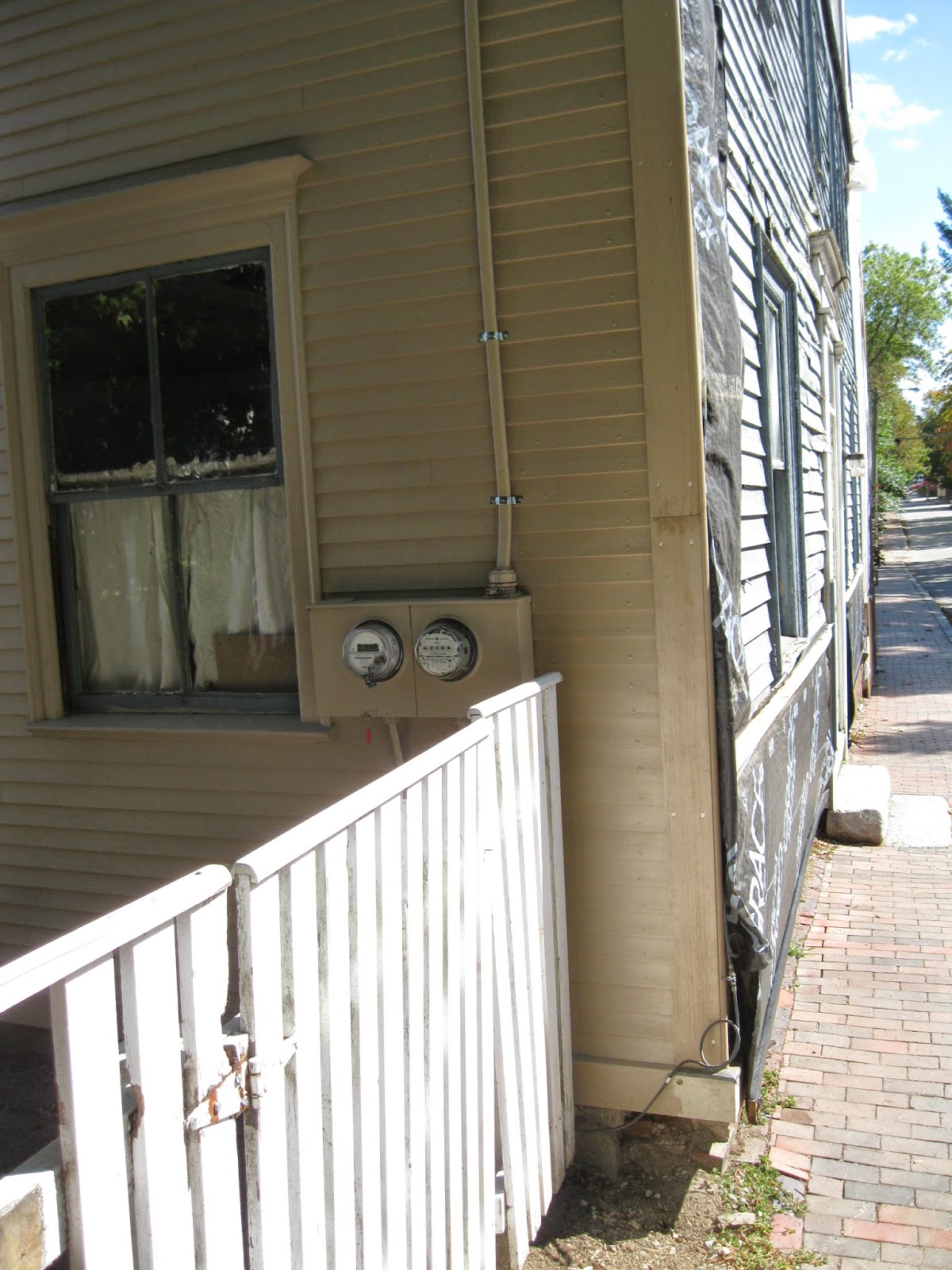 The Aaron Conant House, which sits on the corner of Washington and Jefferson Streets at Strawbery Banke Museum, is currently undergoing rehabilitation by Bedard Preservation and Restoration.  The exterior of the house is scheduled to be finished by the end of 2014.  As part of the project, Bedard Preservation plans to rebuild a late 18th century addition to the house.  In advance of this reconstruction, we excavated along the extant foundation line to determine how deep the foundation was originally dug. 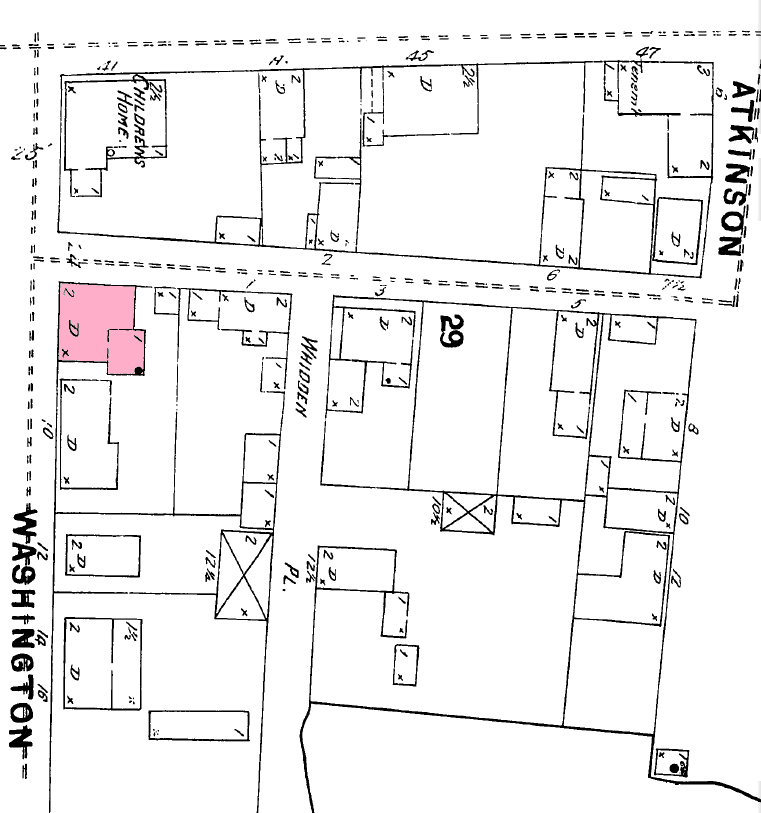 The history of the house is incomplete, but based on deed research, we know that the land was bought in 1697 by Captain John Hill, who built an early saltbox house on the lot.  John Hill sold the property to George Walton, a shopkeeper, in 1736.  The present house was likely built around 1750, based on early Strawbery Banke curator and architectural historian James Garvin's observations of structural elements.  In 1778, George Walton deeded the house to his granddaughter, Temperance Walton.  It was then sold to George Ham in 1791, who likely made some changes to the house, including raising the foundation and adding on a scullery to the kitchen.  The 1 story addition is visible on Sanborn Insurance maps from the 19th and 20th centuries (see the 1898 Sanborn Map, for example, with the Conant House colored in pink).  The house is currently named for Aaron Conant, a stage coach driver who owned the house from the 1834 through 1856.


During our excavation, we determined that the late 18th century builders focused on supporting the SE corner of the scullery foundation, and used minimal stones along the south and east sides.  Surrounding the existing foundation stones there was a good layer of fill that likely dated to around the 1790s when the foundation was built, including many large chunks of plaster that likely related to George Ham's renovations to the house.  Along the south side, below the plaster fill, we reached a nice midden (trash pit) layer, full of organic material, like bone, charcoal, and shells, along with a variety of colonial artifacts.  The artifacts from this layer are exciting in that they expand our knowledge of how the lot was used before George Ham's renovations, and can help us date this period of use. 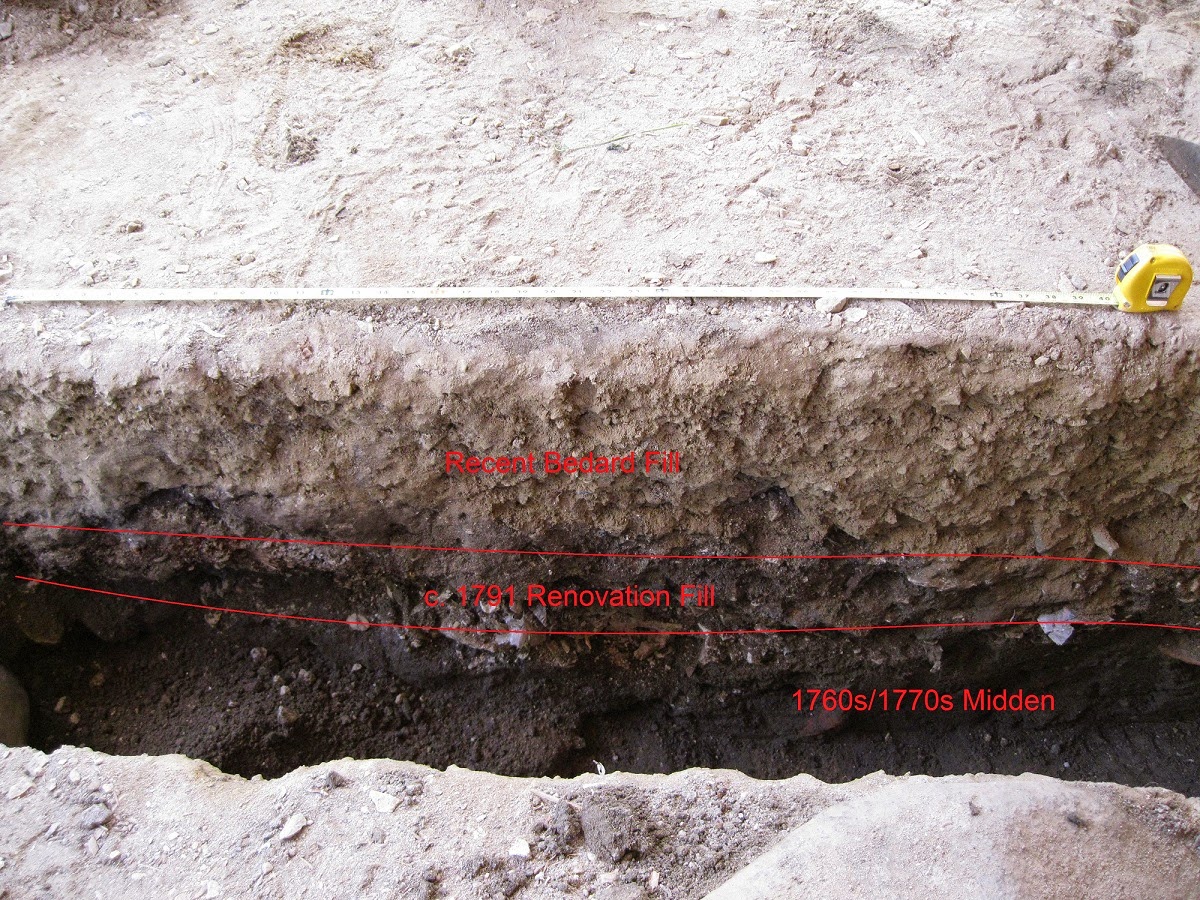 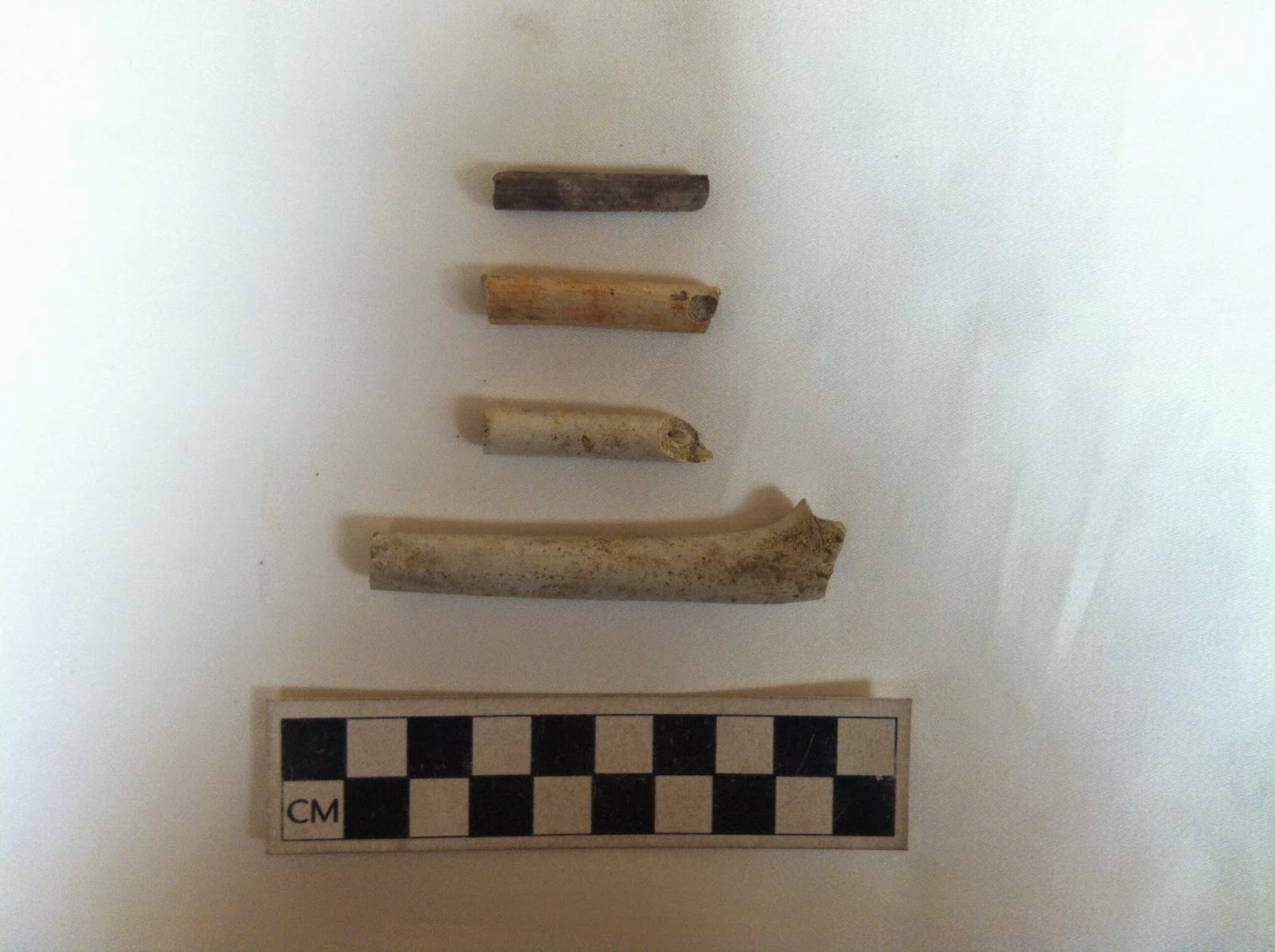 In the midden layer, we recovered 4 pipe stems. Pipe stems are useful dating artifacts.  Historical archaeologist J. C. Harrington, who spent his early years excavating at Jamestown, realized in the 1950s that the diameters of pipe stems decreased over time.  Based on the typology his work developed, we can date the Conant pipe stems.  There were 3 with a 5/64" diameter, meaning they date from 1720-1750, and 1 with a 4/64" diameter from 1750-1800 (see Deetz 2010 for a published pipe stem typology). 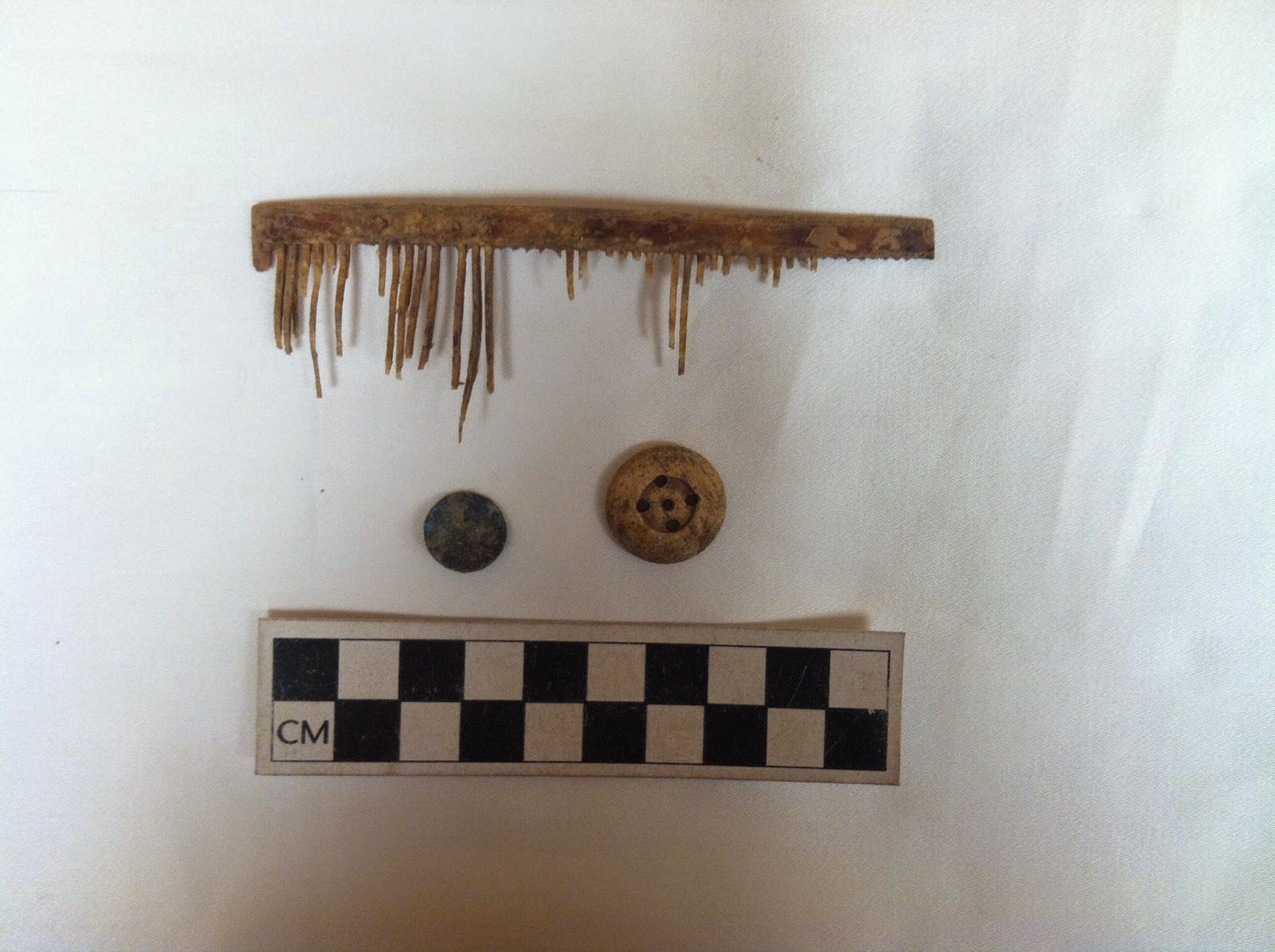 We also recovered a few personal artifacts, including a bone comb, an 18th or early-19th century 5 hole bone button (the center hole is a product of button production), and a metal button, with a shank style that dates it to 1760-1785 (see White 2005 for dating bone and metal buttons). 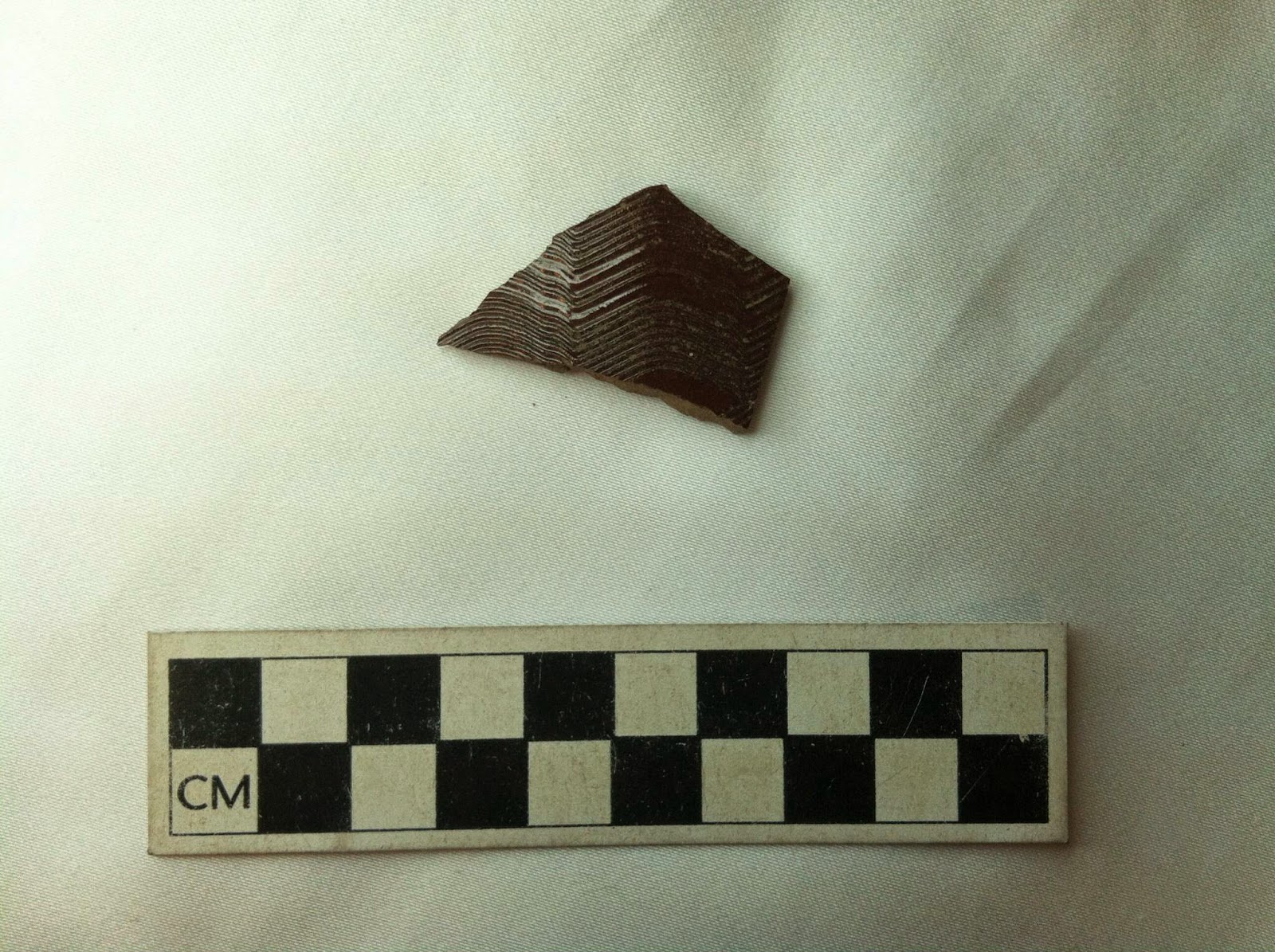 There was a variety of stoneware and redware, including this mid-18th century Staffordshire redware sherd with engine turned decoration. 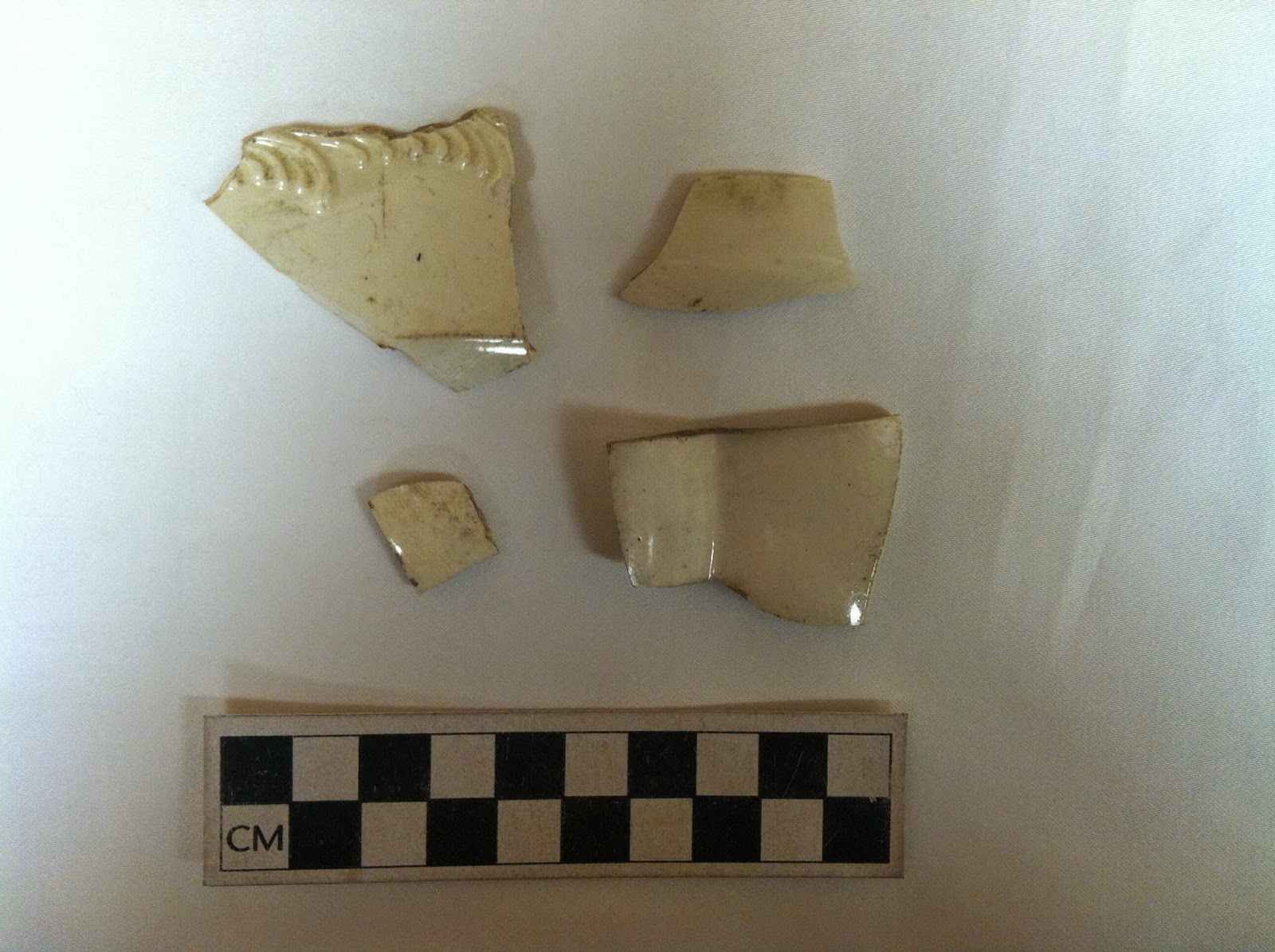 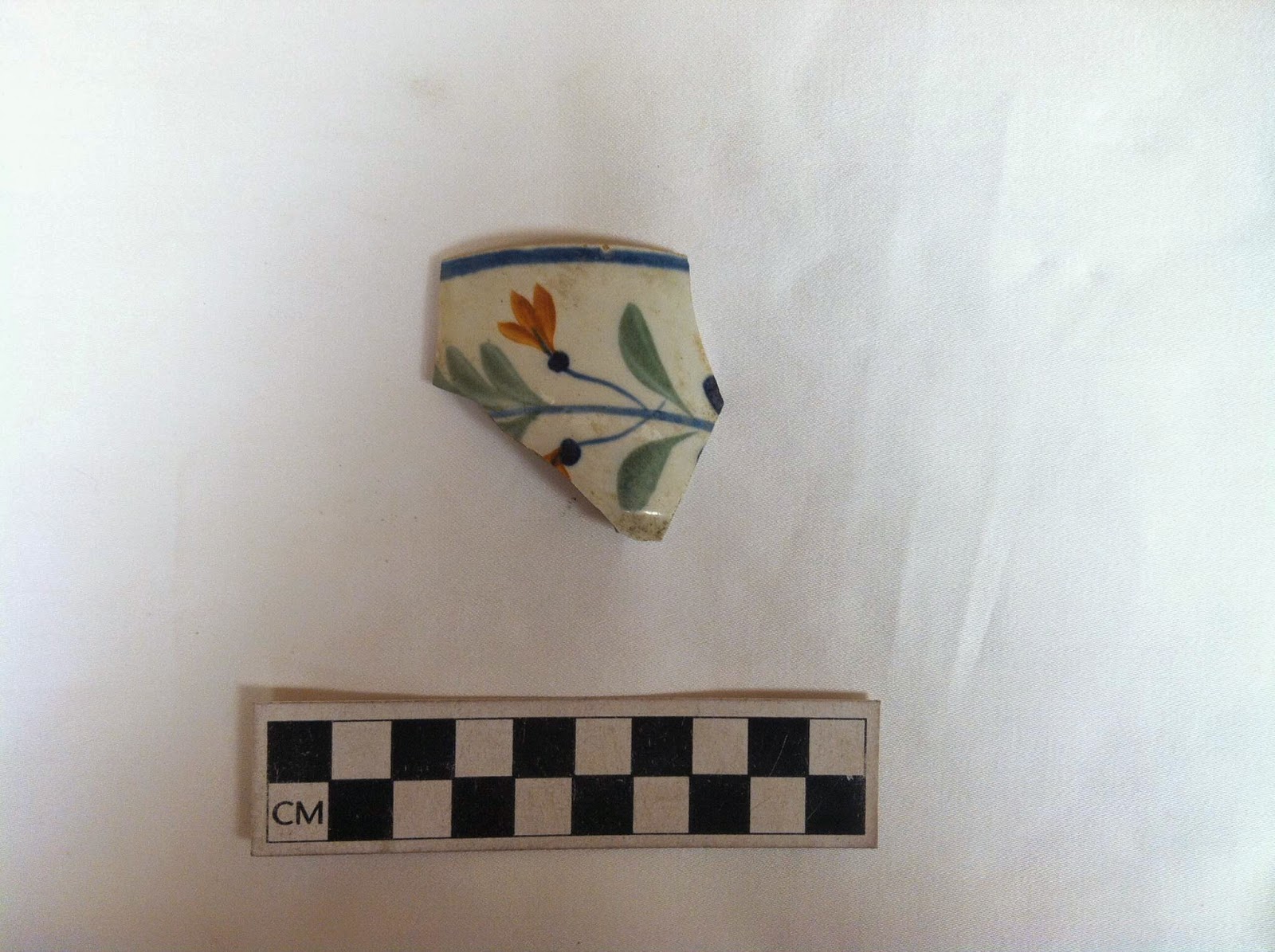 We recovered a variety of creamware sherds, most of which are from 1762-1780, including a handpainted flowered creamware sherd (c. 1765-1810).  The high concentration of creamware in the ceramic assemblage of the midden layer confirms that this area of the lot was in use after 1762. 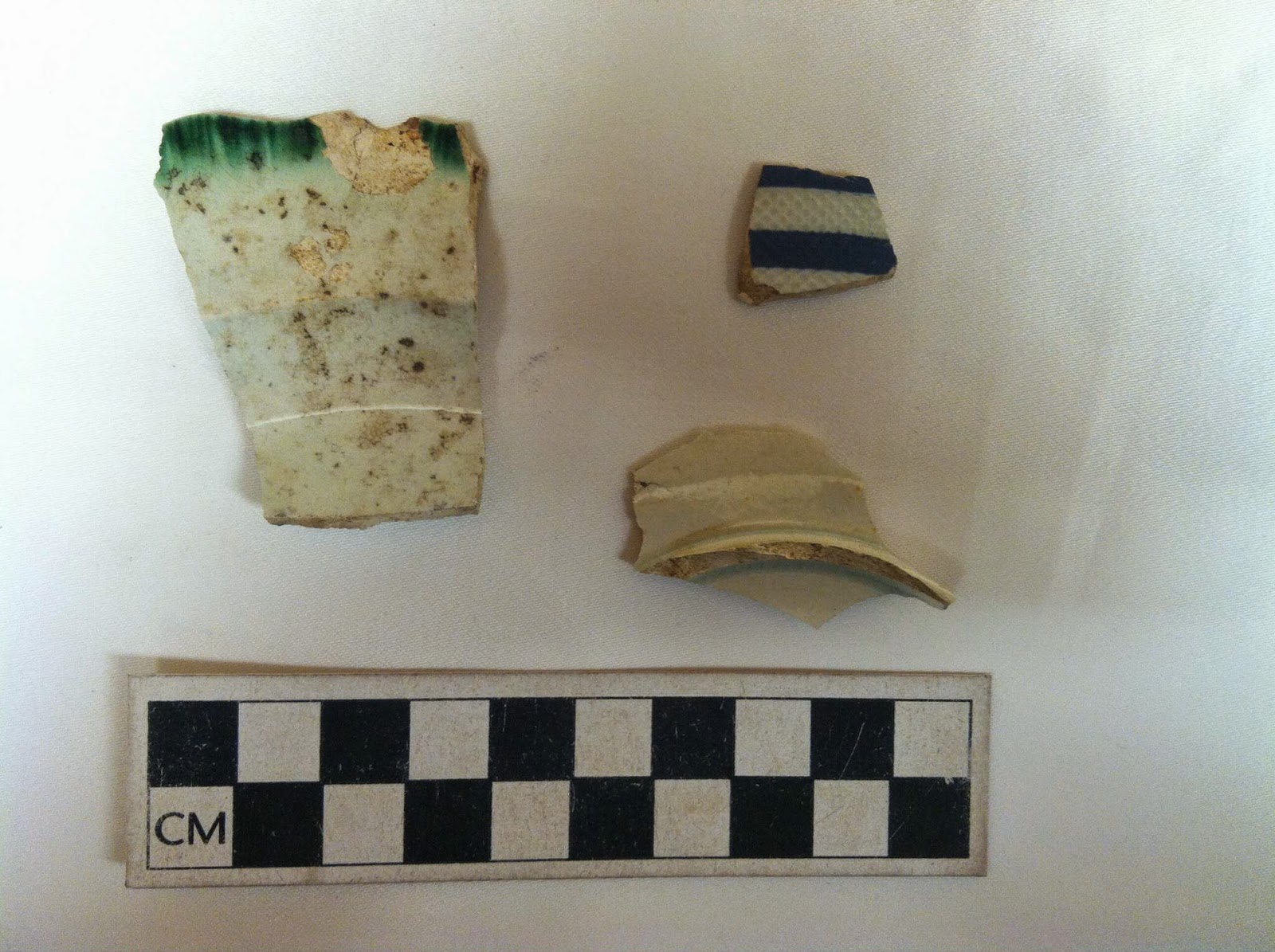 From the fill surrounding the scullery foundation, we recovered a few sherds of pearlware, including a green, scalloped edge fragment that likely dates to between 1800 and 1830, and a blue and white fragment of mochaware with rouletting which dates to the 1790s-1890s (see Sussman 1997 for more mochaware).  The presence of these later ceramics along with the plaster in this layer helps confirm that renovations were made after 1790.

Hopefully our excavation and research, and this interesting collection of artifacts will be helpful in the ongoing rehabilitation of the Conant House!