I’m Brianna Birch! I’m going into my sophomore year in college at RIT. My major is Sociology & Anthropology and I’m on an Archaeology track. I wanted to get in some field and lab work over the summer so I decided to come to Strawbery Banke. In the lab session, we worked with artifacts from the Yeaton-Walsh site. I chose to work with pearlware ceramics, more specifically transfer-printed pearlware. Most transferware is blue, but there are some other colors. I matched, labeled, and  mended several pieces. With several nearly complete vessels, I was able to identify and research the prints on a black transfer-printed plate, a purple-pink transfer-printed sugar bowl, and a set of blue transfer-printed saucer and matching cups.  These pieces are from different periods of the 19th century, and were likely used by different tenants of the Yeaton-Walsh House. 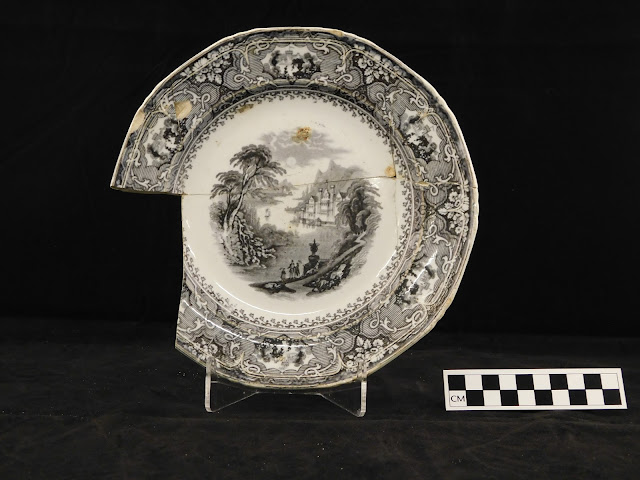 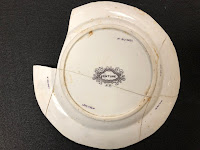 This is an 8 inch plate with black transfer print, known as “Venture.” The print has Romantic or Classical motifs, and it portrays four figures of different sizes that stand on a river bank near an urn that is on a pedestal in the right foreground. The rim of the plate is decorated with flowers, and oval cartouches lined with vines. In the center of each cartouche, there is a castle with three small rectangle towers. The maker of the piece is Ralph Hammersley (& Son), who operated from 1859-1905 in Tunstall & Burslem, Staffordshire. The maker’s mark is a large cartouche, lined with vines, with Venture written inside. Underneath the cartouche is R. H., Ralph Hammersley’s initials. 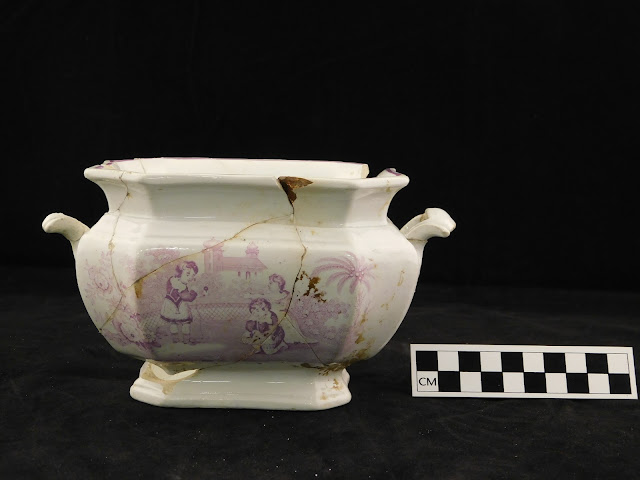 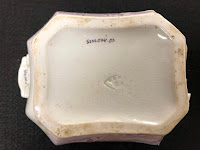 This is a white sugar bowl with a purple-pink transfer print, and it portrays a Romantic-style landscape theme. The print is a variation of a print known as “Infant Sports,” and portrays three children playing. Behind them is a church off in the distance, with domed steeples. The scene is outlined by large flowers and trees and repeats on the opposite side. The top rim is outlined in a dark purple. The maker of the original Infant Sports print is William Smith (& CO.) from 1825-1855 from Stockton-on-Tees, County Durham, so this variation is likely also from the mid-19th century. There are two marks on the bottom of this piece, one which reads “Porcelain Opaque,” and one that resembles a cross or an X. 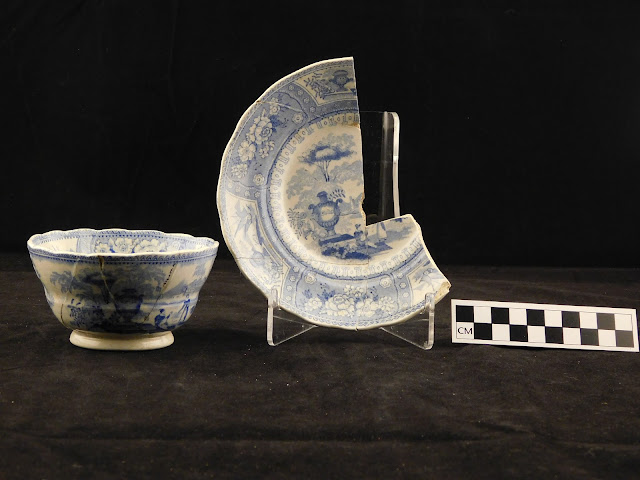 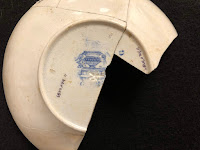 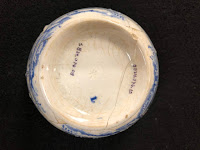 These pieces are a from a tea set with blue transfer print called “Canova.” The print shows two figures, a man and a woman, near a large urn at the water’s edge. The man is seated playing a stringed instrument, and the woman is standing near him watching. Across the water, in the distance, there are stylized classical buildings. The rim of the saucer is decorated similarly to the cup, with the same large urn, but instead of two figures nearby there is a ship with three sails. The maker of these pieces is George Phillips, who worked in Longport, Staffordshire, from 1834 to 1847. This “Canova” print is very similar to other “Canova” prints produced by Thomas Mayer, who also worked in Longport, Staffordshire but whose business shut down in 1838. There is a secondary maker’s mark, in the shape of a flower or star, on the bottom of the saucer and cups.

Ceramics expert Louise Richardson has discussed Phillips' transfer prints in more depth for the Transferware Collectors Club -- check out her article for more information, including which prints were found at other Portsmouth archaeological sites, including Deer Street and the Warner House!
Posted by Unknown at 10:27 AM